This article explains how to create some simple mathematical shapes with graphics.py, a popular graphics library for Python written by John Zelle. Graphics.py is a single file containing graphics functions such as Point, Line, Circle and Rectangle. In this article though, we are just going to use it to plot single points.

At the top of the page is a blancmange like shape. The program that drew it is at the bottom of the article, if you want to jump straight there.  Otherwise, a couple of simpler plots will be demonstrated first, just to show a couple of underlying principles.

Installing graphics.py can be as simple as downloading the latest version of the file. You can just leave it in the same directory as your python script.

With graphics.py installed, run the following Python script. It will draw a circle by plotting sine against cosine:

Run the program and a window should appear, looking like the image below. When you are ready, click the window to dismiss it and end the program.

Edit the above script. Change the “pt = ” line to add a multiplying factor of “2*” to the x coordinate. Or, just uncomment the “Ellipse” line and comment out the “Circle” line.

Run the program and it now draws am ellipse. Basically just a squashed circle, twice as wide as it is high: 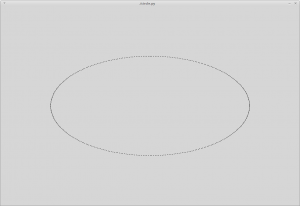 If you introduce a multiplying factor to the angle (a) instead, a different effect is seen. Edit the program. Comment out the “Elipse” line and uncomment the “Lissajous” line. This is like the circle again, except that the x angle is multiplied by 2 and the y angle by 3.

Run the program and a swoopy pattern appears. It is still a plot of sine against cosine, but the “frequencies”, or wavelengths, of x and y are out by a factor of 1.5. You can vary those numbers to produce more complicated patterns.

At the top of this article is a figure shaped a bit like a blancmange, or a sort of Mexican hat. The program to draw it is below. It can also be downloaded directly from Github, or with wget, like so:

More accurately, the shape could be called a radial sinusoid, decaying as 1/x from the origin. Although it might seem more complicated than the plots above, this “3D” surface plot is built using similar principles. Plot sine against cosine and you get a circle (a trigonometrical identity). Plot sin or cos alone and you get a wave. Pythagoras can be used to work out radial distances.

Altering some parameters near the top of the script changes the produced image. For example, try changing the viewing angle, va (currently 10 degrees) to different values between 0 and 90. It represents the angle above the horizontal from which the user sees the image. The effect of radius is fairly obvious. Reducing the wavelength will give you more ripples.

Changing the “decay” rate alters the steepness of the shape. Fiddle with the main “y=” statement, and you can draw different shapes altogether.

Inserting the blancmange routine into a function and calling it with increasing va (viewing angle), and blanking the screen appropriately, produces a nice animation. It is only practical on a quick machine though, and will be far too slow on a Raspberry Pi.

I originally got the “blankmange” algorithm from a 1980s UK computer magazine. But I can’t recall which one it was, let alone the name of the author. Thanks anyway!

Update – I think it might have been UK computer magazine Your Computer, November 1982. Page 22, “Opening Up Graphics“. If so, thanks to Mr Tim Langdon! All done in 10 lines too – program D4.

2 thoughts on “Messing Around with Graphics.py”

This site uses Akismet to reduce spam. Learn how your comment data is processed.